You are here: Home » About us » The Monnoyeur Group: 100 years of service to shape the future

The Monnoyeur Group: 100 years of service to shape the future

The Monnoyeur Group has 6,500 employees and is a leading retailer and wholesaler of machinery and services for industry and construction.

A Caterpillar dealer since 1929, the Monnoyeur Group has been serving its customers in France by selling, leasing and providing field service for all its products and services.

The values that inspire our employees every day are embedded in the corporate culture of each company in the Monnoyeur Group.

For more than 100 years, the Monnoyeur Group has always been there for its customers. The group has successfully prepared for, adapted, invested, retained the human resources needed and taken risks to consolidate its know-how and to ensure customer satisfaction in France and elsewhere.

Our 100 uninterrupted years in business and more than 80 years of partnership with Caterpillar are testimony to the professionalism of our teams. It is also testimony to our employees’ ongoing commitment to all our customers.

In order to plan and manage our future growth and to support our customers in all their activities, the courage to face challenges guides all of the group’s employees as they manage customer relationships and lead their teams.

Throughout the economic and social crises of the 20th century, Group Monnoyeur has successfully preserved high-quality human relations both inside and outside the group. By deliberately keeping its organisation on a human scale, the Group is committed to straightforward business relationships, responsiveness and mutual trust. Our customers applaud us for it and our employees demonstrate their appreciation through their commitment and diligence.

The spirit of enterprise

Vision and entrepreneurship are two qualities that have allowed the Monnoyeur Group to tailor its products and services, withstand a series of economic shocks and expand its range of activities and know-how as it accumulates business expertise. The group’s growth is underpinned by the spirit of enterprise and innovation, which is a source of creativity inside company and an effective growth driver for our market share and long-term revenue.

Dependability and continued customer satisfaction rely on the integrity of our business relationships. Our working approach and culture provide the basis for trust and ensure the quality of our services. 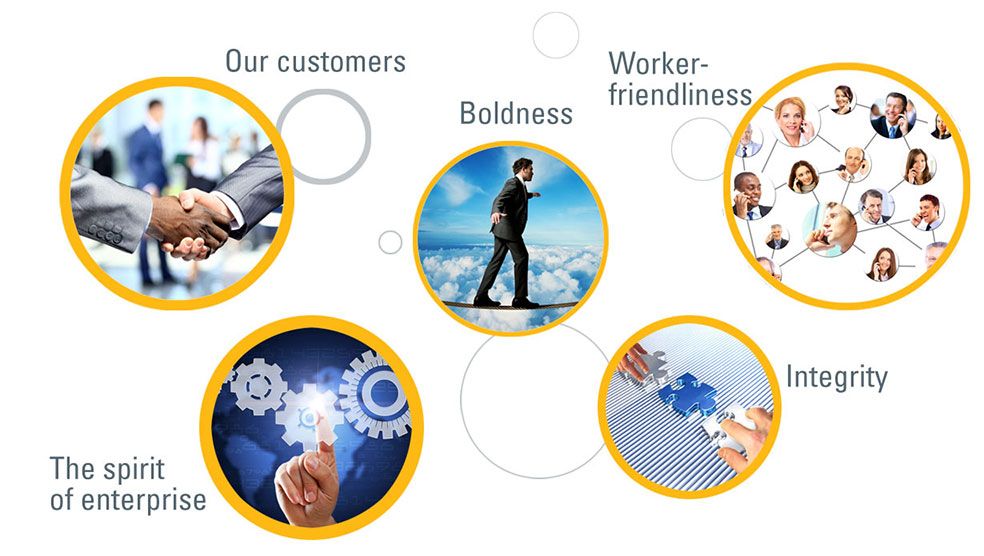 2010 and beyond: commitment to alternative and renewable energy

2012: Drawing on its proven experience in wind farm projects, the Group stepped up its activities in renewable energy by creating a new subsidiary, Eneria-REN, which primarily engages in developing anaerobic digestion and gasification projects.

The 2000s: from selling Caterpillar engines to leasing construction equipment

The 1990s: birth of the Monnoyeur Group
A leader in sales of equipment for public works with a presence in several market segments, including materials handling and energy, Bergerat Monnoyeur diversified and reorganised its businesses.

1994: The company changed its name to the Monnoyeur Group and split its “capital goods” business into:

1961-1989: a period of strong growth
Against a buoyant economic backdrop, the company structured itself and deployed its expertise to enhance field service and meet the specific needs of its customers, multiplying regional facilities and opening its first specialised machine shops (marine engines, lift trucks and mobile cranes).

1981: In 1981, Bergerat Monnoyeur became Caterpillar’s general dealer for Algeria.
The group branched out into the materials handling and energy sectors.

Throughout these years, Bergerat Monnoyeur successfully supported Caterpillar’s entry into new markets in Poland and Romania.

Since 1929 : a steadfast commitment to Caterpillar in order to serve its customers

At the time, Caterpillar equipment was in a league of its own in Europe. While offering their customers high-quality machinery and equipment perfectly tailored to their needs, Henry Bergerat and Francis Monnoyeur aimed to extend their services in the form of a major strategic asset: they launched a local post-sales service program to supply their customers with a full array of spare parts and accessories crucial for their businesses.

At the beginning of the century as France entered the industrial era, French companies imported their equipment from England, the only country at the cutting edge of the industrial revolution.